EVOLUTION OF THE OREGON
DEPARTMENT OF FISH AND WILDLIFE

The history of the Oregon Department of Fish and Wildlife can be divided into three distinct periods: 1878-1921, a time of organization and change; 1921-1975, a time of stability; and 1975­-present, a time of reunification signified by the formation of a department responsible for both fish and wildlife. This memo describes those changes. Copies of legislation containing major revisions are attached as appendices.

The Fish and Game Protector was replaced by an act of the 1898 Legislative Assembly which established the Board of Fish Commissioners Members of the Board included the governor, secretary of state, and a fish commissioner appointed as executive officer by the governor. This agency was replaced in 1901 by a Fish Commission (5) composed of governor, secretary of state, and state treasurer.(6) The commission appointed a Master Fish Warden as administrator and confined itself to the regulation of commercial fishing. The responsibility for enforcing game laws as well as forestry laws was now regulated by the office of Game and Forestry Warden created in 1899. This arrangement remained unchanged for ten years. Regulation of fish and game activities was not placed into a single agency until 1911 with the establishment of the Board of Fish and Game Commissioners.(7) This board was authorized to appoint a Master Fish Warden and a State Game Warden. In this same year, the Legislative Assembly created the State Board of Forestry consisting of the governor, the acting head of the Forest School of the Oregon State Agricultural College (Oregon State University), and five appointees. The creation of a Board of Forestry separated the function of forestry from that of fish and game.

In 1921, the duties of the Fish Commission were to:
.provide for the better protection, preservation, and propagation of salmon, shad, sturgeon, and other anadromous and food and shell fishes;
.to see that all laws relating to the commercial fisheries of the state are enforced;
.to provide license schedules and fees and methods of collections;
.create a department of hatcheries and fish culture.(l2)

The Game Commission was established to formulate the general policies and programs of the state respecting the management of wildlife, game fish, and wildlife recreation; set hunting seasons, bag limits, and methods of taking wildlife and game fish; and operate facilities such as
fish hatcheries, game farms, public shooting grounds, and game management 'and public access sites. (14)

The Game Warden's title was changed to State Game Supervisor in 1931 and again in 1949 to Game Director.(15) With each change in title carne an increase in administrative powers. A change to the Commission's name from Game Commission to Wildlife Commission made by the 1973 Legislative Assembly was done to reflect a growing concern for managing all the state's wildlife and not just the state's game species. (16)

It is the policy of the State of Oregon that wildlife shall be managed to provideoptimurn recreational and aesthetic benefits for present and future generations of citizens of this state. In furtherance of this policy, the goals of wildlife management are:

-to maintain all species of wildlife at optimum levels and prevent the serious depletion of any indigenous species;
-to develop and manage the lands and waters of this state in a manner that will enhance the production and public enjoyment of wildlife;
-to permit an orderly and equitable utilization of available wildlife;
-to develop and maintain public access to the lands and waters of the state and wildlife resources thereon; and
-to regulate wildlife populations and the public enjoyment of wildlife in a manner that is compatible with the primary uses of the lands and waters of the state and provides optimum public recreational benefits.
The Commission did not receive revenues from the state general fund but operated on funds appropriated by the Legislative Assembly from the sale of hunting and fishing licenses and tags, excise taxes on sporting equipment, and federal funds.

Policing powers of the Game Commission were transferred to the Oregon State Police (OSP) when OSP was organized in 1931.(17) During the 1973-1975 biennium the Commission transferred over 3.5 million dollars to the OSP for enforcement of hunting, fishing, and recreational laws and regulations.
By 1974 the Commission consisted of five commissioners appointed by the governor. Two commissioners were selected from that portion of the state east of the Cascades, two from west of the Cascades, and one from the state at large. The Commission selected one of its members as chairman and appointed a director of the Wildlife Commission who held office at the pleasure of his Commission.

When the Oregon Legislative Assembly merged the separate state fish and wildlife commissions in 1975, it created a department that has had an impact on recreation and jobs in dollar amounts far beyond that imagined by most citizens.(18) A major reorganization of the agency occurring in 1986 saw the duties of the department's single deputy director split into two separate jobs; deputy for operations and deputy for policy and programs. During this reorganization the former Environmental Management Section was elevated to division status and renamed the Habitat and Conservation Planning Division.

In recent decades, the Legislative Assembly has been active in considering bills related to the Department of Fish and Wildlife. For example, in a five-month session, the 1985 Legislative Assembly considered 90 related bills. During that session several important changes were made in wildlife law including some license fee adjustments.
The Legislative Assembly also created a Pacific States Legislative Task Force consisting of legislators from the four coastal states. (19) This legislative group acted as a clearinghouse for opinions from fishing interests.

Several legislative changes in 1985 were designed to have a beneficial effect on department revenue. The department was given authority by House Bill 2374 to seek voluntary contributions from sportsmen for special management programs.(20)
Considerable attention was focused on water policy and law and several changes were made to the water law in 1985. Creating most interest was the passage of House Bill 2990 dealing with the siting of small hydroelectric projects in state waters. Finally, 1985 legislation (House Bill 2111) provided for the exemption of STEP (Salmon Trout Enhancement Program) volunteers from having to obtain water rights for fish egg incubation boxes using less than 30 gallons per minute ofwater.(21)

The 2001 Legislative Assembly approved a bill to move the headquarters of the Fish and Wildlife Department "promptly" from Portland to Salem in an effort to enhance efficiency and accountability.(22) 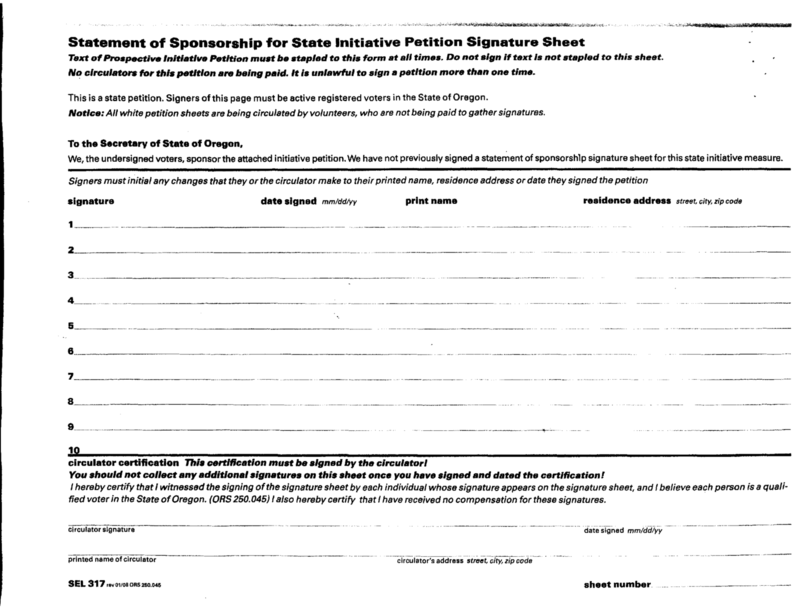 NO NEW FISH OR WILDLIFE TAGS / NO INCREASED TAG FEES

1.         We, the undersigned, believe that the most recent announced increases in fees for fish and for wildlife tags are excessive and unwarranted. We oppose any new fees for any species of fish not currently listed that last year did not require a license to catch and oppose any increased fees for the catch of any fish in Oregon and its waters, including but not limited to coastal waters. Many hard working Oregonians fish as a way of making ends meet and putting food on the family table. The “subsistence” fishers represent, according to the Oregon Department of Fish and Wildlife, only four percent of the catch of fish in this state, and have only a small impact ecologically, yet they include a great number of people. We are not against commercial fishers, but we believe that the ordinary family fisherman has little say in the process by which fish tags, fees and allocations are made. Therefore, we propose and support the following.

2.         ODFW should initiate an “Oregonian’s Special Tag” that reduces the fee charged for catching non-commercial volumes of fish commonly caught in this state. Such a tag should be available to all Second Generation Oregonians and to those First Generation Oregonians who have lived in Oregon for 20 years or more, if they are here as a legal citizen.

BALLOT MEAURE FOR AN “OREGONIANS SPECIAL TAG” FOR SUBSTENCE FISHING

WE HEREBY PETITION FOR AND SUPPORT having a statewide Ballot Measure that would, if passed, create an “Oregonians Special Tag” that reduces the fee charged for catching non-commercial {Food Fish} volumes of fish and shellfish commonly caught in this state and/or in its waters and coastal waters. Such a tag should be available to all citizens of Oregon, and it is understood that persons here illegally are not legally citizens. The text of the Ballot Measure would state:

It is the intent of this Ballot Measure to ensure fair and reasonable access to fish and fishing for fish and shellfish in the waters and coastal waters of the State of Oregon to non-commercial Oregonian fishers. In order to do this, this Measure specifies a method for determining the cost for non-commercial Oregonians Special fishing tags, the species to be covered by the said tags, the number of fish permitted to be caught under the said tags, and who may apply therefore. We believe these matters are closely related and constitute one subject matter in that both logically and practically, in order for any one of these matters to be effectively addressed the others must also be effectively addressed. The following shall be added to Oregon statutory law, and all changes to the Oregon Administrative Rules necessary or appropriate to effect the below shall be adopted by the Oregon Department of Fish and Wildlife.


ORS 506.110 is hereby created and added to the laws of Oregon:
ORS 506.110: Oregonian Special Tag for fishing.
1.            There is hereby created an “Oregonian Special Tag” for non-commercial fishing. The Oregon
Special Tag (“Special Subsistence food Tag”) shall be available, as of the date 90 days from the
passage hereof, to all Oregon citizens. It is understood that persons resident in Oregon illegally are not
and cannot legally be legal citizens.
2.            The Special Tag shall be available for fishing for any fish or shellfish that is regulated by the state
of Oregon as of the date of passage into law hereof.
3.            The Special Tag shall be priced at the level that applied on January 1, 1980 to the species for
which it applies. If there was no tag, or a tag with no price, as of that date, the Special Tag shall cost
$10 per year per species or, where groups of species are covered by a tag, per group of species.
4.            The Special Tag shall entitled the lawful owner thereof to engage in fishing in any and all places
that were lawful for fishing on January 1, 1980, the subsequent designation of marine reserves
notwithstanding.
5.            Any violation of the catch levels or other terms of the Special Tag shall be punished by fines or
penalties equal to those which applied in 1980 to the species for which it applies. If no such fine
existed at that time, the fine shall be $100 per incident (not per fish or shellfish caught).
6.            Rules and laws of general application to Oregon fisheries shall continue to apply to the
Oregonian Special Tag provided that such rules and laws of general application do not contradict and
are not inconsistent with this section ORS 506.110.
7.            Administrative rules may be added as may be necessary to effectuate the intent of this section
506.110 by the Oregon Department of Fish and Wildlife provided however that such rules are not
inconsistent with the provisions hereof and do not alter, change, amend or abolish the terms hereof,
whether by their direct action or indirectly.
8.            The below are to be the maximum catches permitted under the Special Oregonian Tags:


RockFish - 15 fish per day (including Sea bass, Snapper, skates or any other species caught off the shore out in the three mile areas from shore);


Flatfish - 30 fish per day (including flounder, Soles, Turbots and halibuts, except Pacific halibut);


Salmon – 5 fish per day (including in all streams and rivers);


The below catch limits are all per day: